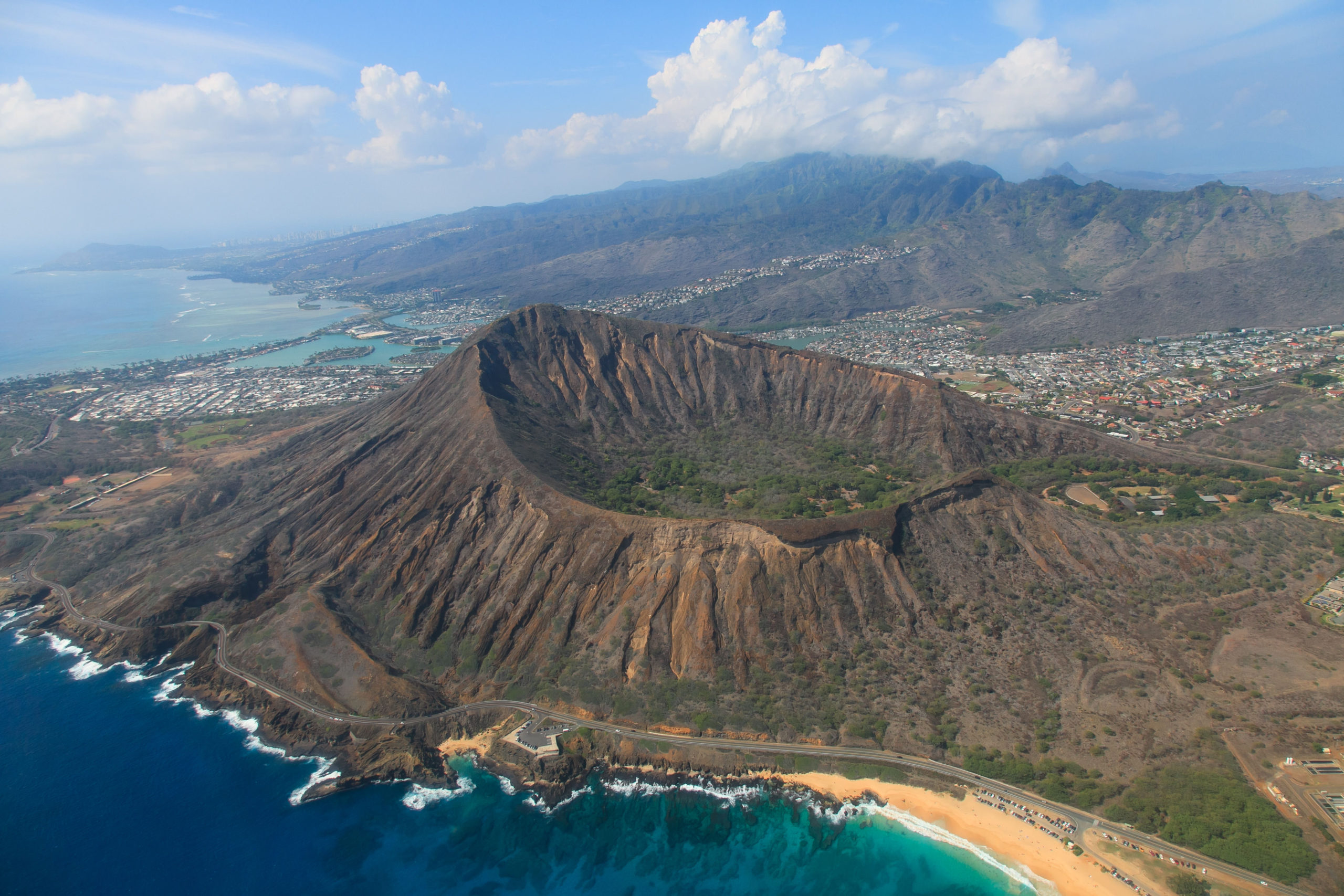 Known to Hawaiians as Lēʻahi, Diamond Head is a popular tourist attraction located on the island of O’ahu. A volcanic tuff cone, the formation itself is a State Monument and is closed to the public. The surrounding area, however, offers trails and other recreational opportunities, while the monument itself serves as a focal point of the views offered by many of Honolulu’s resort hotels and beaches.

The Hawaiian name of Lēʻahi is most likely derived from the words “lae” and “ahi,” with “lae” meaning “browridge, promontory.” The word “ahi” translates to “tuna,” which is likely a reference to the shape of the ridgeline that resembles the shape of a tuna’s dorsal fin.

The English name of Diamond Head was given to the formation by British sailors in the 19th century. The name was inspired by the calcite crystals found on the adjacent beach, which the sailors mistook for diamonds.

Diamond Head is just one part of a system of cones, vents and other formations that are collectively known as the Honolulu Volcanic Series, which is a series of volcanic eruptions that formed many of O’ahu’s other landmarks. These include Hanauma Bay, Koko Head, Manana Island and Punchbowl Crater. Each of these formations is much younger than the main mass of the Ko’olau Mountain range, which is estimated to be around 2.6 million years old. Diamond Head, on the other hand, is estimated to be between 400,000 and 500,000 years old.

Fort Ruger, which was the first U.S. military reservation on Hawaii, was located in the interior and adjacent exterior areas of Diamond Head. Also called Diamond Head Lookout, the crater was used as a strategic military lookout in the early 1900s due to the panoramic views it offered of Waikiki and the south shore of Oahu. A navigational lighthouse known as Diamond Head Lighthouse was built next to the crater’s slopes in 1917, while a few pillboxes are located on its summit.

While an FAA air traffic control center was in operation at Diamond Head from 1963 to 2001, only a National Guard facility and Hawaii State Civil Defense remain at the crater today. In 1968, the crater itself was declared a National Natural Landmark. 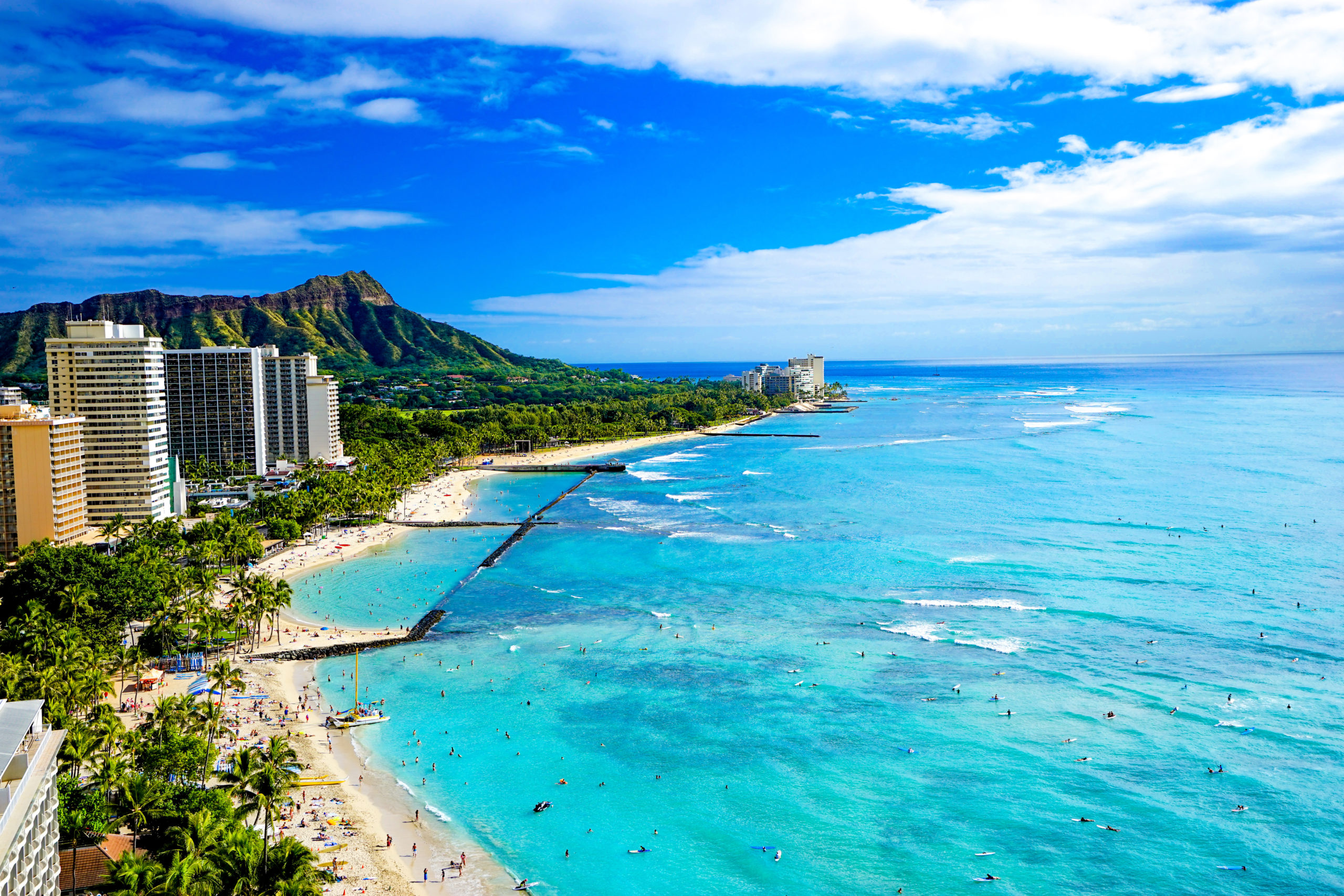 Hiking the area that is designated as part of the Diamond Head State Monument offers breathtaking views overlooking Honolulu and the Pacific Ocean. The trail system takes hikers to the edge of the 400,000-year-old crater. While the hike is only 0.75 miles each way, it can be challenging due to its uneven terrain and 560-foot elevation gain. The hike also features a portion where hikers must climb 74 steps followed by another 99 steps near the end. Those who wish to continue to a coastal artillery observation platform that was built in 1908 will have to climb another 43 steps through a narrow spiral staircase.

Parking is limited at Diamond Head State Monument and, while the park closes at 6:00 pm, no one is permitted to begin the hike after 4:30 pm. When visiting the monument, you should plan on taking 1.5 to 2 hours to complete the round trip journey. The only water available on the trail is at the beginning. Therefore, it is best to bring water with you for the hike.

Moving? Know the value of your home …

Got a question? We are available …

Got a question about this property?

Oops! We could not locate your form.